Before joining EIKONES as a NOMIS Fellow, Philipp Ekardt held teaching and research positions at the Peter Szondi-Institute for Comparative Literature at Freie Universität Berlin, as a member of the Bilderfahrzeuge project at the University of London’s Warburg Institute, as well as serving as editor-in-chief of the journal Texte zur Kunst. His first monograph Toward Fewer Images. The Work of Alexander Kluge, partly based on his PhD dissertation at Yale University, has been published as an OCTOBER Book with MIT Press. He is currently completing his second book – to appear with Bloomsbury Academic – which reconstructs Walter Benjamin’s fashion theory, tracing its implications and manifest relations with the fashion criticism of its moment and the history of Paris couture, attending to its connections with sociological and morphological theories, proposing a reevaluation of the term elegance as an aesthetic concept, while also investigating the subject of fashion as an epistemic object that allowed Benjamin to reconsider fundamental questions such as time and material.

In recent years Philipp has also served as an outside thesis advisor at University College London’s Department of Classics, at the Bard Center for Curatorial Studies (NYC), as well as teaching in smaller capacities at UCL, and at EIKONES – where he co-organized a summer school seminar with former member Rahel Villinger. He has lectured internationally at universities and cultural institutions such as Cambridge, Central Saint Martins, the Courtauld Institute, Leiden, Museum Ludwig Cologne, Oxford, Princeton, UCL, the Warburg-Haus Hamburg, and the Zentrum für Literatur- und Kulturforschung Berlin, among others.

One influential way of modeling the interrelation of gesture and image relies on the factor of interruption. In this model it is assumed that a gesture emerges on the condition that a body’s potentially expressive movement is either halted or segmented; reciprocally, the emergence of this gesture marks the moment in which the otherwise transient movement including its affective and aesthetic qualities is potentially registered in or as image. While clearly inherited from the media-technological moment of photography, the logic deployed here does not necessarily presuppose a full ‘arrest’ of kinesis into stasis; such segmentation can also occur in technologically temporalized media (film). This model has, in the wake of its media-historical moment of dominance, found strong advocates in thinkers like Benjamin, Brecht, Warburg, as well as in their readers, while also being taken up in more recent approaches such as media archaeology, among others.

In my project (tentatively titled Assemblages and Compositions. Image Models in Goethe and Lady Hamilton) I turn to the period around 1800, in particular to the writings of Goethe and the art of attitudes performed by Lady Hamilton to investigate a historical formation, but perhaps also an entirely different epistemic model, in which we encounter a surprisingly different logic for the configuration of movement, gesture, and image. One of my main points of departure are the descriptions of tableaux vivants in Goethe’s 1809 novel Die Wahlverwandtschaften (Elective Affinities) which in scholarship have frequently been considered as exemplary cases of such movement ‘arrests’ into (living) images. Through close examination of Goethe’s language and the investigation of various medial and historical contexts I instead emphasize the importance of processes of material circulation and (re-)assembly, as well as underlining the centrality of the activity and aesthetic concept of composition for the formation of the tableaux. On a parallel track I argue that the contemporaneous posing practice developed by Emma Hamilton, which gained her widespread fame across Europe, and which Goethe describes in Italienische Reise  (Italian Journey), escapes the concept of gestural arrest in a similar way. In order to account for the extraordinary stability which these fleeting movements achieved we instead need to understand how they communicate with the conceptual and visual schematizing mechanism of contour– a popular term among Goethe and his contemporaries until Romanticism; a formal feature characteristic for the neoclassical stylistic milieu in and out of which Hamilton developed her performances; and a central feature of the medium of the Umrissstich in which her attitudes achieved informational stability and compactness.

The project responds in part to more recent demands articulated by protagonists in the field of cultural techniques which, following up on what Latour termed a science of associations – an associology – are calling for analyses of how material/medial aggregates create stability rather than discontinuity. Both Goethe’s texts and Hamilton’s art allow us to envision a model in which gestures as poses are composed and in which images still emerge at suspension-points, but within the traffic of materials, objects, media etc, rather than through the arrest of bodily movement. Returning to Goethe’s novel I finally intend to explore the function of composition for the construction of a text that accounts for such image making. 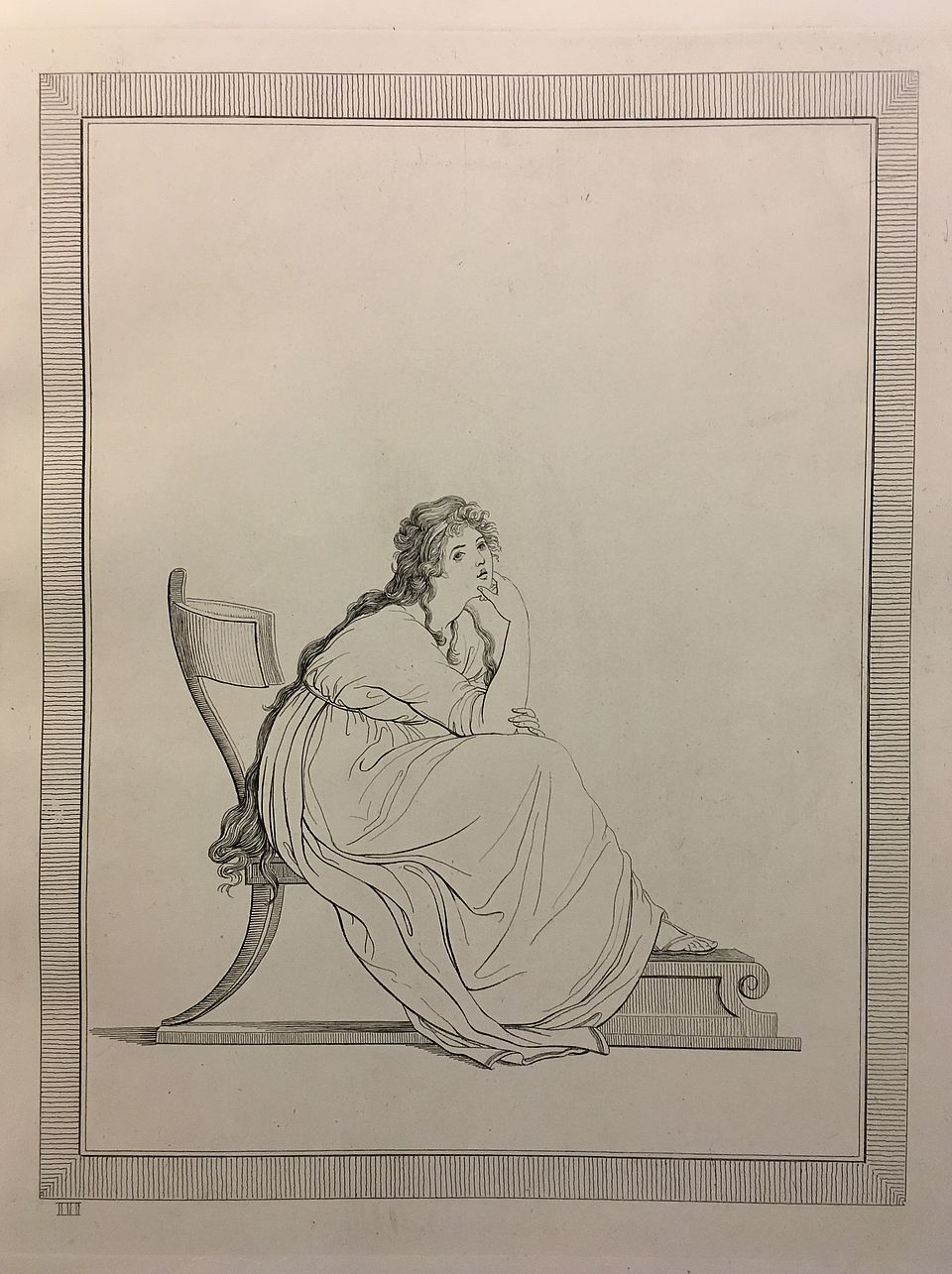